In early July, our oral historian CHENG Nien Yuan attended the International Oral History Association’s 2016 Conference in Bengaluru, India. What did she expect of the conference and how did it turn out? How was Southeast Asian oral history represented in the panels? Read on to find out!

I didn’t really know what to expect before arriving at my first ever international conference venue’s opening plenary in Bengaluru, the Silicon Valley of India. Men in business suits? Hushed, academic tones, coupled with knowing, sagely nods? Lots of hand-shaking and card-exchanging, surely.

Instead my partner and I were greeted by a riot of colour, riotous laughter, and the delicious, earthy smell of chai. Was this really the ‘high tea’ before the opening? There were no cucumber sandwiches to be found, and I was glad of it. Everyone seemed to be swathed in high-definition hues. Even the makeshift tent containing yummy goodness was a bright red and a shade of blue I can’t name:

These motifs of colour and flavour would continue to weave themselves throughout the next four days of Speaking, Listening and Interpreting, in the aptly-themed International Oral History Conference 2016. This short blog post wouldn’t be able to do all of it justice: from the shimmering shadow-puppetry performances to the many fascinating and exciting morning panels. Every day was jam-packed with activity. (Special thanks to Sarah Lowry for Ubering with me to and from each venue!)

A year ago, when I heard that the next IOHA conference was to be in India, I was elated: as happy as I was confused (mad, even) by the eminent Donald Ritchie’s statement in The Oxford Handbook of Oral History: “The forty contributors in this volume from five continents, reflect the global nature of oral history” (2011, 6). Only four (one Australian, two African and one South American) out of said contributors come from or specialise in areas outside of the US and Western Europe, and not one contributor was from anywhere in Asia. 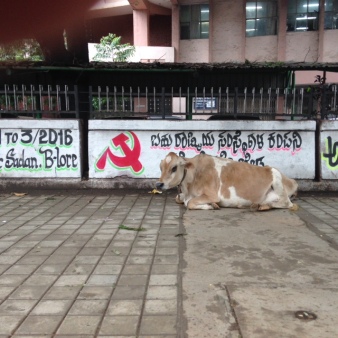 India’s successful bid for (and execution of) IOHA2016 was a big step in truly acknowledging and exploring this “global nature”. What sort of oral histories emerge from different local contexts? Is the definition of ‘oral history’ even the same everywhere? In India, for instance, I learned that the oral tradition/history distinction evident in the West is intriguingly blurred: puppetry, ritual, songs, were all heavily featured in this conference, which, as a performance scholar, was right up my alley. I suspect this is a characteristic of many oral history conferences, but everyday as I hear different stories I was at some point moved to tears, anger, frustration, triumph and so on. But I was always moved.

[1. The Ramayana epic told to us in condensed form via amazing shadow puppetry. The picture is blurred because the puppets are in constant, glimmering motion, especially the evil Ravana. Here he tries to convince Sita to be with him, but she is literally and figuratively unmoved. 2. The amazingly articulate Aparna U. Banerjee translates for us a poem from the Master puppeteer’s father. Photos courtesy of Nien Yuan Cheng.]

One thing did nag at me, which might interest PoP readers: amongst the cacophany of many different languages (32 different countries were represented), the voice of Southeast Asia was relatively tiny. Three Singaporeans (including me) presented, and there was one paper on Aceh by University of Newcastle scholar Muhammed Thalal which I regrettably missed as I was in a parallel session (there are six, six to choose from in each timeslot! Luckily, the organisers cannily put most of our papers in a thumbdrive that came free with the goody bag. *Thumbs up emoji*).

[My presentation on Thursday 30 June 2016. At this moment I was talking about the irony of Tan Pin Pin’s oral history of political exiles To Singapore With Love being exiled from Singapore itself. Photo courtesy of Lachlan Kurtz.]

Before the conference, as I mulled through the schedule, I was looking forward to seeing many important scholars in the flesh. The bigwigs of oral history, as it were. I did have the privilege of meeting them: Don and Anna Ritchie, Rob Perks, Indira Chowdry, Mark Cave, to name only a few. (Alessandro Portelli had a cold and couldn’t join us on Skype, unfortunately.) They were lovely when I, tongue-tied and wide-eyed, spoke to them. But what got me excited, really excited, were the up-and-comers, the young people from all over the world who don’t have tenure, who are finding their footing and doing incredible, boundary-pushing things in the process. With their permission, I’d like to end the blog post by featuring some of them here: 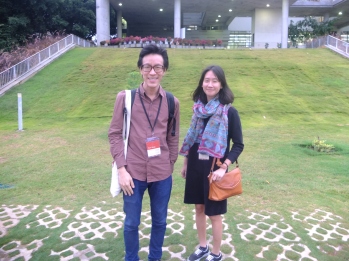 [I had the privilege of meeting some of the very people involved in Singapore’s Oral History Centre, which I talk about in my presentation. I was nervous about it but they were so lovely. I look forward to seeing them again, perhaps for a cheeky interview! Incidentally, Mark is one of the new representatives of Asia in the IOHA Committee! Congratulations, Mark! Photo courtesy of Denise Ng.]

Denise: “I’ve been with the oral history centre for 3 years now and primarily take care of the media-related projects. I used to be a journalist, working for the digital media unit at SPH and various production houses. My small presentation  “A case study of newsroom culture in Singapore” discusses how the use of oral history methodologies help to throw light on newsroom operations in the past.”

Mark:“I’ve been working at the Oral History Centre (OHC), National Archives of Singapore, as an oral history specialist since the end of 2009. I’ve conducted oral history interviews on topics such as the Japanese Occupation, education, sports, and the performing arts. I also train schools and other groups on oral history methodology. At IOHA 2016, I presented a paper titled ‘From Voice to Text and Back Again: Increasing Search Functionality and Restoring Orality to Oral History through New Web Technologies at Singapore’s Oral History Centre’. Over time, we have seen a divergence in the theory and practice of oral history. While theoretically we prize orality as a defining characteristic of oral history, in practice, we find that practitioners are more likely to use transcripts than the source audio or audiovideo recordings. OHC’s revamped oral history portal tries to address this using voice-to-text technologies to place audio, synopsis and transcripts together, encouraging users to engage more thoroughly with the audio recordings of interviews. In so doing, we see a restoring of orality to oral history, where users can look beyond the informational content of interviews and are encouraged to listen to the voice and all its nuances of tone, rhythm, speech pattern, expression, accents, pace, and the deeper meanings embedded.” 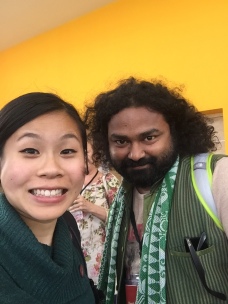 Imagine my delight when I saw another performance scholar in the conference!! In his riveting presentation, Bënîl took us through the oral tradition and rituals of the Namasudras of Bengal, even breaking into song towards the end. He indeed showed that we should, as Diana Taylor calls for, move beyond archives and explore our embodied historical repertoires. Bënîl’s impressive CV can be seen here. Most recently he has been appointed as a Fellow at Harvard University’s Mellon School of Theatre and Performance Research. Congratulations Bënîl!!

“I studied history in Brussels but undertook my first oral history project in South India while doing my Ph.D. I work on dalit (untouchables’) history and on their trajectories of social mobility and the memories they have of it, so far mostly in rural area but soon also in urban contexts. I do work mainly on the basis of oral testimonies collected among Dalits but do think that enlarging the perspective to non-Dalits’ narratives would enrich the study.”

Nien Yuan CHENG (nien.cheng@sydney.edu.au) is a PhD candidate at the University of Sydney on how oral history is performance and performative, and what that means in her home country, Singapore. Nien thanks the Sydney Southeast Asian Centre (SSEAC) for their generous funding and also the IOHA Committee for an amazing conference.

One thought on “Of Puppets and Polyvocality: The XIXth International Oral History Association Conference in Bengaluru, India 27 June – 1 July 2016”